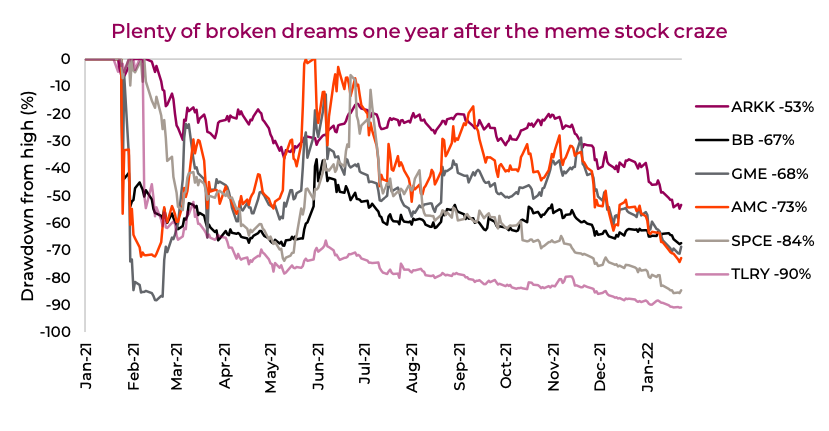 So far, we’ve had a rollercoaster of emotions for investors this year, with many markets on the verge of or even dipping their toes into correction territory. Recent large intraday swings may make it seem like we’re closer to the elusive capitulation day that often bottoms out, but history suggests that such days are basically impossible to know until they’re over. .

With volatility high, the risk of being wrong seems more punishing than at any time in the past 20 months. Belief is important when investing, but belief in itself means nothing if it is not based on rational decision-making. Investors have short memories and are more captive to recent experiences. Buy the dip – wash, rinse and repeat. The habit has been simple, reinforcing and rewarding, especially for a bunch of new investors.

Looking back, it is now clear that most high growth/unprofitable tech stocks were in a bubble. Well, the bubble has definitely burst and many individual names have dropped 50%, 60% or even 70%. This is not just a routine correction for this segment of the market. Funnily enough, we’re approaching the one-year anniversary of the peak of meme stock mania. Last January, GameStop (GME), AMC Entertainment (AMC), Blackberry (BB), and other names rose on hype on Reddit and other platforms, cementing the term “meme stock.”

Companies grew based on how well they would thrive in the new world or stick to the establishment, not based on revenue and cash flow. Since then, the road has been anything but paved with gold and filled with Lambos. Sure, some fortunes were made, but the withdrawals for the biggest thieves were horrific. For a time, investors pretended to be part of a movement, owning some of the worst companies. This idea seems to be dead.

Over the past decade, there have been several localized bubbles, but none have led to widespread contagion risk in the market. However, if mega-cap growth is no longer in vogue, that could change. Easy money, fringe money and low interest rates have always been there for the taking, making the dips buyable. However, with rates rising and financial conditions becoming less accommodative, is the path of least resistance shifting to the downside?

We’re not saying investors shouldn’t stay heavily invested, because the risk of being out of the market if it’s a normal correction can be just as painful. But we plead for balance. Investors should again pay attention to valuations, reduce their exposure to companies with overly optimistic growth assumptions and refocus on portfolio allocation for the sake of diversification. The predicament that many investors find themselves in is that they are still paying too much for growth and are overexposed to these sectors. This is rooted in a few behavioral biases.

too much confidence – Sometimes called the “delusion of superiority”, this is a tendency in most people to believe that they are above average, whether it is their intelligence, their sense of humour, their ability to drive or invest. When it comes to investing, overconfidence encourages investors to take riskier bets. When the markets have long rewarded this type of risk-seeking behavior, it only magnifies the optimism.

Overoptimism – People who are overly optimistic will have unrealistic expectations of how often they will get a good result versus a bad result. Strong recent performance gives reason to feel more optimistic about the future. Dissatisfied with average market returns, these behavioral biases encourage investors to increase their exposure to riskier investments. Recency bias also plays into this excess of optimism.

These biases also lead to increased business activity. The gamification of many online trading apps/sites today is intended to further increase trading volumes. Lower transaction costs are generally assumed to be good for investors; however, reducing commissions to zero may have had the perverse and counter-intuitive effect of reducing investor welfare and fueling this bubble.

High earnings multiples are often a manifestation of high confidence, not necessarily strong earnings prospects. 2021 has been a year of exceptionally strong earnings growth and stock returns. This growth will be difficult to follow and the market realizes that many companies will not be able to meet the earnings growth expectations that their stock prices have set. This hits growth investors, reminding them that strong growth is the exception, not the rule.

When feedback is easy to get, it’s all too easy to be convinced of your own abilities. These hard-wired biases are difficult to eradicate, especially when strong performances reinforce them. Often, the best course of action is to follow a simple advice: diversify and rebalance if necessary.

Price matters, but cheap price is not the same as value

The battle between value and growth will likely last for some time. The growth outperformance has left plenty of room for value to catch up and we wouldn’t be surprised to see more market volatility as the two factors collide. Obviously, we have no idea if the bottom has been reached, but the excesses seen over the past two years are being eroded and this is a process that can take a long time. Interestingly, Canadian inflows into dividend-oriented equity ETFs, which lean heavily toward value, continue to be strong, with the category adding more than $240 million last week and $110 million the week before. . That said, last week’s earnings from growth mega-caps like Apple, Alphabet and Microsoft continue to impress. Again, it’s hard to say if the trend has reversed.

There is no doubt that valuations have started to matter again, but there’s a big difference between what’s really worth and what’s just going down. Rather than just looking at which stocks have fallen the most, focus on areas of the market that have sustainable, long-lasting growth, but can also be bought at reasonable prices in the changing conditions of monetary policy tightening. It is good practice to have price targets which, if achieved, result in quick action. Targets and stop losses are simple ways to help remove emotion from investment decisions and mitigate behavioral errors.

Any opinions expressed herein are solely those of the authors and do not represent the views or opinions of any other person or entity..