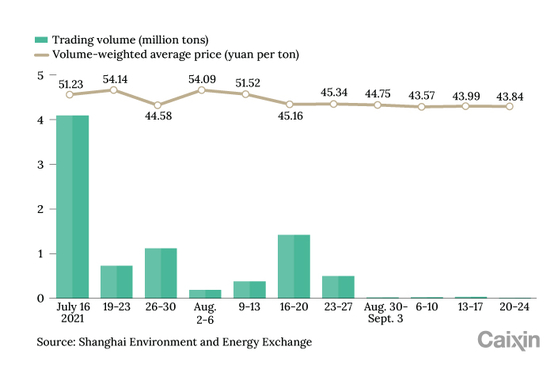 â€¢ Last week, the Chinese carbon emissions allowance market (CEA) saw a substantial drop in trade volume compared to the previous week, but had a slightly higher closing price. The total volume fell 63.9% to 11,572 tonnes. The volume-weighted average price edged down to 43.84 yuan ($ 6.78) per tonne.

â€¢ The total weekly volume of Certified Emission Reduction Credits (CCER) in China increased 171.5% to 3,812,230 tonnes, driven by an eight-fold increase in the Tianjin market. The Shanghai, Chongqing and Beijing markets are nearing their respective emission allowance submission deadlines, with the former two experiencing increased activity and Beijing having no activity at all.

â€¢ Chinese President Xi Jinping pledged to end the construction of new coal-fired power plants outside of China in his speech to the United Nations (UN) on September 21.

â€¢ The Shanghai Environment and Energy Exchange (SEEE) has announced its second regional CEA auction for the 2020 compliance year. The auction will take place on September 30 for 2 million tonnes of Shanghai regional CEA with a floor price. fixed at 48.22 yuan per ton.

â€¢ During the shortened trading week (September 22-24), the CEA market experienced a substantial drop in trading volume, with a closing price slightly higher than the previous week.

The CEA market ended the three-day trading week with a total volume of 11,572 tonnes, down 63.9%, rising from the nadir of 658 tonnes for the week of August 30. Block trades were absent for the fourth consecutive week. Transaction prices on the open market closed this week up 2.14% at 44.36 yuan per tonne, while the volume-weighted average price edged down to 43.84 yuan per tonne.

The market still seems to be waiting for measures to improve the dynamics of the market.

The volume in the nine regional pilot markets increased to 3,812,230 tonnes, driven by an eight-fold increase in the Tianjin market, which recorded a total weekly volume of 2,446,538 tonnes, the bulk of the volume – 1,931,332 tonnes – negotiated on Friday September 24. Shanghai CCER’s trade increased 49.4% to 582,225 tonnes, being the second most active market. The Sichuan stock exchange maintained its steady pace at 433,708 tonnes, up 5%. Beijing, Fujian and Hubei have not seen any CCER transactions.

Shanghai, Chongqing and Beijing are approaching compliance submission deadlines. Recent trading by CCER in the Shanghai and Chongqing markets has seen a marked increase as the deadline approaches. On the contrary, trading in the Beijing market had come to a complete halt in the past two weeks, likely because Beijing announced the April compliance deadline and covered entities had time to prepare.

Of the nine regional markets, only Shanghai, Beijing and Hubei display daily CCER price information. Guangdong reports weekly averages every Monday. Shanghai discloses its cumulative total values, from which the offline selling price can be deduced. Guangdong segregates credits on its exchange based on compliance eligibility, although the corresponding volume information is not being disclosed.

The ESA announcement (link in Chinese) the auction will be held on the morning of September 30 for 2 million tons of Shanghai CEA. The floor price of the offer is set at 48.22 yuan per tonne, i.e. 1.2 times the weighted average price according to the volume of transactions on the open market on the ESA from November 1, 2020 to August 31. The first auction for the 2020 compliance year has been conducted. on August 18, with 543,042 tons of Shanghai CEA sold at 39.76 yuan per ton out of the 800,000 tons available, and the floor price of the offer set at 39.76 yuan per ton. The upcoming auction date coincides with the submission deadline for the Shanghai CEA 2020 compliance year.

Read more
Caixin ESG Bi-weekly: the monetization of green assets on the way

On September 22, the provincial government order energy-intensive companies to suspend production to meet energy consumption targets set by the central government. Dubbed â€œdual controlâ€, the policy aims to simultaneously control total energy consumption and energy intensity. In a rating report released in August by the National Development and Reform Commission, Zhejiang received a â€œyellowâ€ rating for both controls, which means reduction targets were not met. About 160 energy-intensive businesses were affected, mainly in the textile, dyeing and man-made fiber industries. The suspension will last until October 1.

To download our app for getting late-breaking alerts and reading news on the go.

To have our free weekly newsletter must read.

To have our free ESG newsletter.

You have accessed an article available only to subscribers