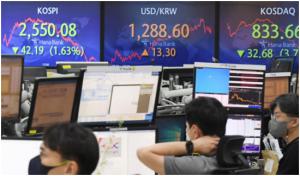 
With the Fed not ruling out the possibility of a 0.75 percentage point rate hike, the dollar won exchange rate is poised to top 1,300 won per US dollar, and foreign investors in stock markets and South Korean bondholders are reducing their investments at an increasing rate. pace.

This has to do with the CPI increase of 8.3% that was announced in the United States the day before. The figure exceeded the market estimate by 0.2 percentage points and market participants‘ fear of a gradual reduction once again spread.

The U.S. benchmark rate is about to get higher than South Korea’s, the won-dollar exchange rate continues to rise rapidly, and foreign money is flowing out faster and faster. According to the Korea Stock Exchange, foreign investors’ net sales in the stock market since the beginning of this year amounted to 15.4058 billion won. In addition, their domestic bond investments fell by more than 80% in three months and no less than $7.2 billion left the stock and bond markets in March and April.

How to Create a Profitable Trading System