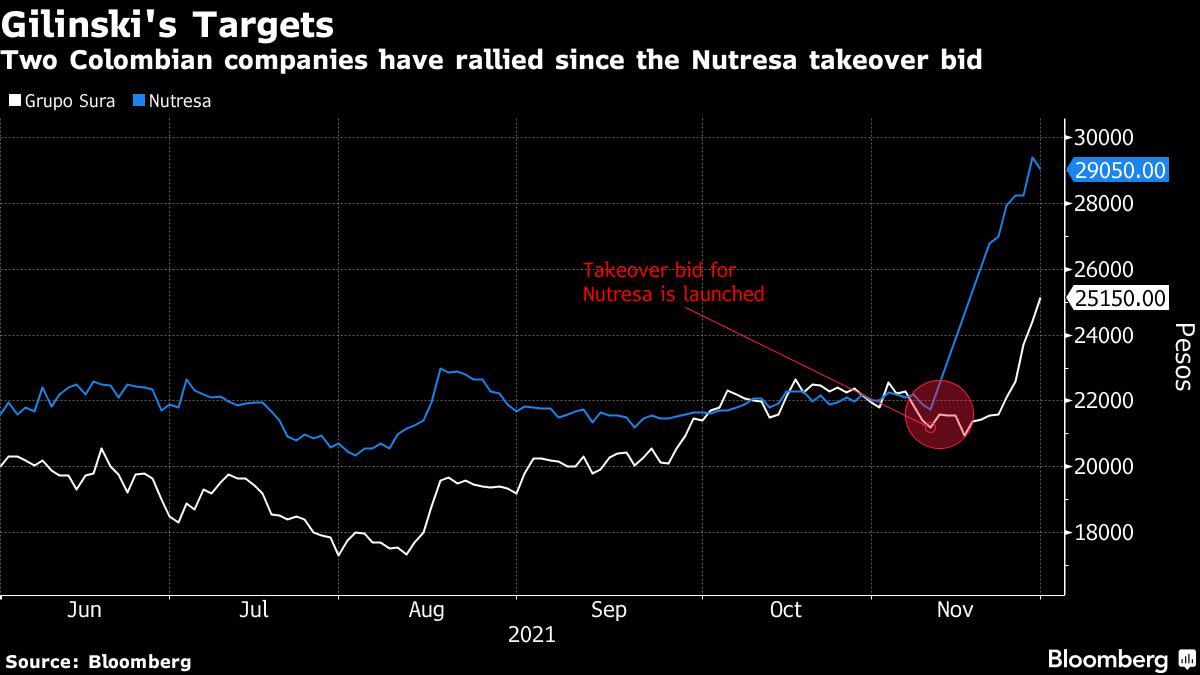 (Bloomberg) – Bank billionaire Jaime Gilinski has launched a bid of up to $ 1.2 billion to take a substantial stake in financial conglomerate Grupo Sura, just weeks after making an offer to take over a Colombian food maker .

Gilinski and his son Gabriel are behind Grupo de Inversiones Suramericana’s offer of $ 8.01 per share for up to 31.68%, announced Tuesday after market close. The offer, which represents a premium of over 27% over the closing price, will revert to shareholders after regulatory approval and could close by the end of this year or early January, according to a person with direct knowledge of the offer.

Gilinski, 63, partnered with the Abu Dhabi royal family last month in an attempt to buy food producer Grupo Nutresa SA in a deal that could be worth as much as $ 2.2 billion. The royal family is not a partner in the offer for Sura, the person said. JGDB Holding SAS presented a guarantee for the offer, according to a stock market file. Gilinski appears as legal representatives of JGDB Holding, according to the Colombian Companies Register.

The price “offers a slight advantage over the fundamental value of the company,” Credicorp Capital analysts Steffania Mosquera and Bianca Venegas wrote in a note.

Sura, Nutresa, Grupo Argos, and other Medellin-based companies form the Grupo Empresarial AntioqueÃ±o, or GEA, a trade association that uses a cross-investment system to push out take-over bids. If Gilinski succeeds in buying Nutresa, he will control the company’s 13% stake in Grupo Sura. Sura, in turn, owns a 35% stake in Nutresa.

â€œOne strategy for gaining influence within GEA could involve taking minority stakes in all groups,â€ they wrote.

Sura owns an insurer and an asset management company and owns a 46% stake in Bancolombia SA, Colombia’s largest bank. Its shares have risen 18% since Gilinski launched its takeover bid on Nutresa. Trading in the ordinary shares of Sura has been suspended following the offer. Preferred stocks, which continue to trade, jumped 21% to 24,100 ($ 6.11) in Bogota.

Gilinski, who had made most of his fortune in finance and private equity, is worth around $ 4.3 billion, according to the Bloomberg Billionaires Index, making him one of the most rich from Colombia.