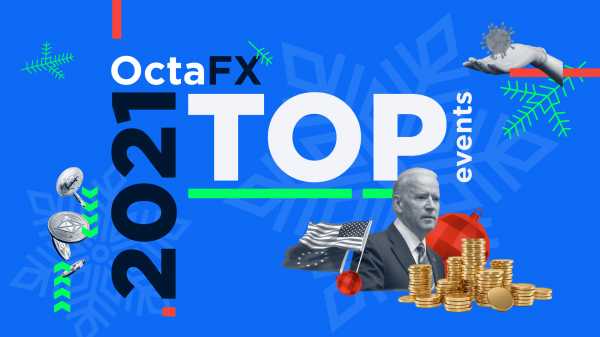 Main stages of the financial market in 2021

The year 2021 has been filled with exciting developments and significant circumstances in global affairs – its economy, politics and policies – impacting the financial industry as a whole. With the help of its analysis team, international Forex broker OctaFX compiled a basic overview to provide some of the most critical vital events that it deemed particularly important.

The US Dollar’s Rocky Journey Under Quantitative Easing (QE)

During the COVID-19 crisis, the US Federal Reserve (Fed) and the European Central Bank (ECB) – the central banks that issue the world’s reserve currencies – have flooded financial markets with new money. The official reason given was to help the economy ailing due to the pandemic.

Consequently, US President Joe Biden’s proposal for a $1.9 trillion stimulus package to Congress arrived on January 21. The Republican Party was highly skeptical of this approach – some members of Congress even recalled the already worrisome continuing growth of the national debt (a massive total of $21.6 trillion at the time). This is a long-term development whose lack of resolution at this time does not shake the market’s firm belief in the reliability of the US dollar.

Fast forward two months, the US Senate (March 6) and US House of Representatives (March 10) both approved the stimulus package before Biden signed it on March 11 as a 1, 9 trillion dollars. Far from being a bipartisan endeavor, no Republican has endorsed the new order. Although the document has been modified, for example, the clause on the increase in the minimum wage has been removed. Fresh money flooding the market like this has filled most market participants with bullish sentiment.

Towards the end of June 2021, expectations for tight monetary policy were high, but the US Senate then agreed and approved a new “infrastructure spending plan”, totaling an additional $1.2 trillion. The reason for this was a sharp increase in inflation in the months leading up to June.

Both institutions – the Fed and the ECB – have kept rates at zero or negative and implemented quantitative easing (QE) throughout 2021, expanding their balance sheets and buying bonds with that money. As a result, their yields have fallen, prompting investors to invest in company stocks and look for other projects.

The Fed announces the end of bailout measures

In September, the US Federal Reserve officially declared that it was ready to end its quantitative easing program and could raise the base rate as early as 2022 rather than in 2023, as previously assumed. The Fed further added that it will continue to buy $120 billion in assets every month for now: $80 billion in Treasuries and $40 billion in mortgage-backed bonds.

The regulator’s rhetoric initially spooked investors, but overseas markets rose on Sept. 23. The US S&P 500 was recovering from a marginal fall and was up 1%. Finally, the US monetary regulator began phasing out market purchases of assets to USD 105 billion in November (from USD 120 billion previously) and to USD 90 billion in December – strong signals for the market that the economy begins to revitalize.

Throughout April, the crypto industry beamed with excitement over an ongoing bull market before bitcoin – surprisingly for the most part – began a sharp correction from an all-time high of 63,500. USD (April 13, 2021) to USD 34,600 (May 29, 2021). During these first initial downward waves, due to triggered margin calls, approximately USD 8 billion in position liquidations took place. This process had put most of the trading community on a new kind of vigilance.

This downward trend continued until July 20, 2021, reaching a price of USD 29,600 per bitcoin (this is more than 53% from the previous all-time high). It was only after this point that an uptrend began with a late summer high of $52,600 (Sept 6, 2021). Most were sure that bitcoin’s bottom at the time had been hit and that more frequent but cautious trading had resumed during this time.

Ethereum Remains Strong But Stable While Bitcoin Surpasses Twice As Much

Six weeks later, the mother of all cryptocurrencies hit its previous all-time high twice in a row – $65,990 (October 20, 2021) and $67,500 (November 8, 2021), justifying a suspected bull market among watchers market, retail investors, and legacy institutions once again. All the while, the altcoin market has held up with a fluctuating performance, seeing the persistence of Ethereum and a few success stories such as the Solana smart contract platform.

The latter rose from $1.84 on January 1 to its all-time high of $258.93 on November 6, gaining 13,972%. Many opportunities for lucrative transactions and initial long-term investments have been realized. At the same time, some solid altcoin projects have stagnated during this period, only showing that their turn of growth has not yet come.

In the fall, the EU and the US agreed to suspend duties on steel and aluminum products. During a speech, the President of the European Commission, Ursula von der Leyen, pointed out that her institution planned to draw up proposals to suspend the duties imposed on goods from the United States. She explained that this would bring trade in steel and aluminum products back to their previous levels. these tariffs were imposed in 2018.

US President Joe Biden has reiterated the intentions of the European Union and the United States to jointly commit to a carbon-based deal for steel and aluminum trade. After President Trump’s era of “economic isolationism”, many investors in the relevant sectors saw this development as a long-term bullish sign.

The European Union at a crossroads

In the fourth quarter of 2021, the euro fell to its lowest value since the beginning of July 2020. The reason for this dip was the deterioration of the business climate in the EU

In Germany, supply problems in most industries have worsened. Berlin, as the world’s fourth largest economy, also inaugurated its new government in December. One of the important goals of the new coalition is to introduce a wide variety of new taxes on secondary property and carbon emissions at all levels, from businesses to individuals. Germany is a major player in the structure of the power dynamics of the European Union. His new government in Berlin will have a lot to say about the way forward in terms of the continent’s financial and political development.

What the future holds

As Powell has hinted throughout the year, in January 2022 there will be a monthly quantitative easing cap of $60 billion, halving the 2021 rate and initiating a likely, gradual farewell to emergency policy. A process that market players of all shapes and sizes (individuals and businesses) will need to pay close attention to.

All of the above dynamics will have exciting new developments in 2022 and beyond, many of which will strike the most by surprise. Thus, financial education and constant research and training in economic and financial literacy are paramount to navigating these rapidly changing markets. This simple truth applies just as much to foreign exchange as it does to the stock market or the realm of cryptocurrencies.

OctaFX is a global broker that has been providing online trading services worldwide since 2011. It provides cutting-edge trading experience to over 7.5 million traders worldwide. The company is well known for its financial expertise, analytics and educational program. She values ​​financial literacy in her business community. OctaFX has also won over 45 awards since its inception, including the 2021 “Best Forex Broker Asia” award and the 2020 “Most Transparent Broker” award from Global Banking & Finance Review and Forex Awards, respectively.

Technology and Covid-19 have impacted the financial market – Yuguda