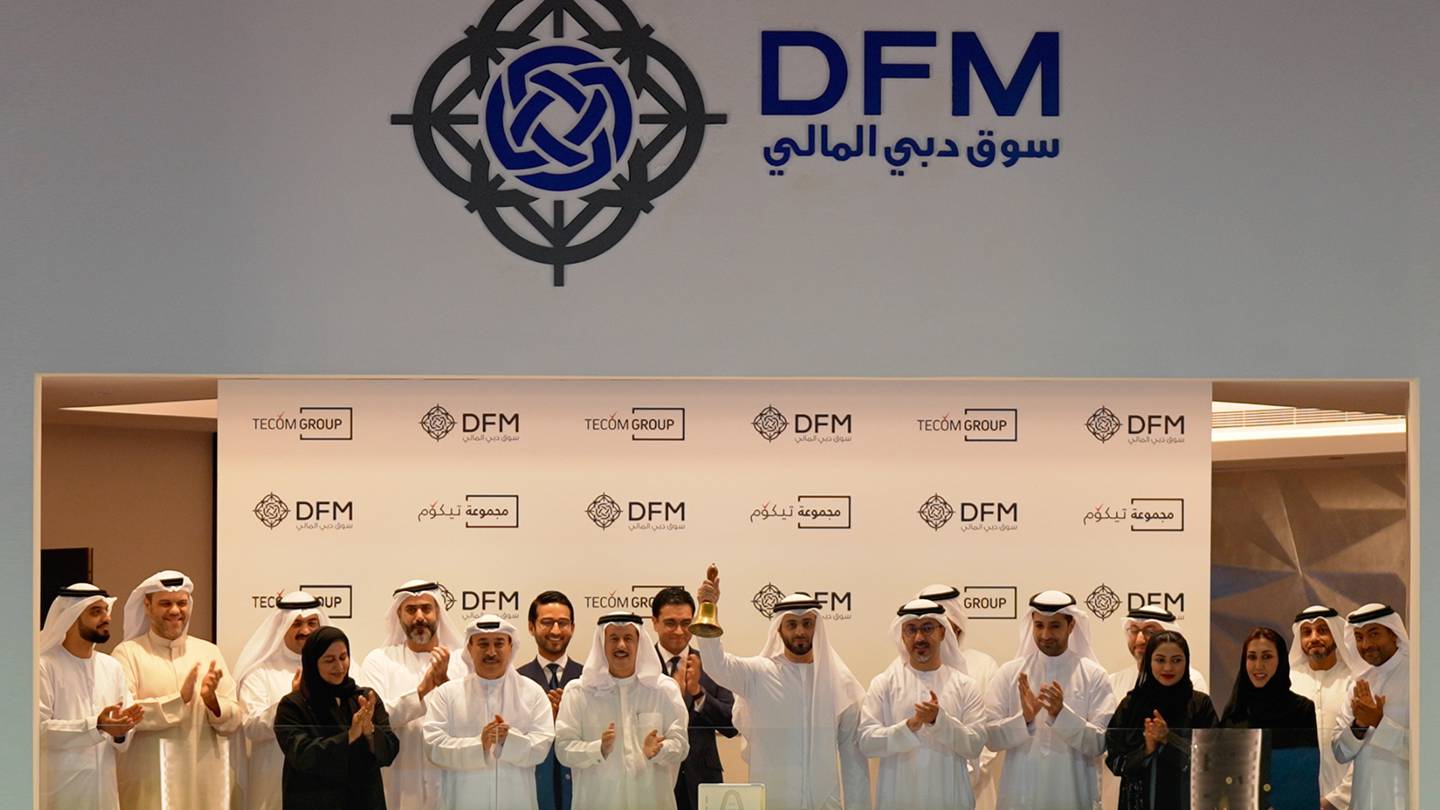 Shares of Tecom Group, the operator of Dubai’s business districts, pared initial gains to trade lower after the company’s debut on Dubai’s financial market on Tuesday.

Tecom raised 1.7 billion dirhams in its IPO last month. The IPO was oversubscribed 21 times, with total gross demand of more than 35 billion dirhams.

The UAE retail tranche of the deal was oversubscribed 40 times, making it the highest oversubscription multiple for listings on the DFM. The IPO has attracted “significant interest” from international investors and about 30% of the qualified institutional offering has been allocated to them, the company said.

“Tecom Group’s listing on the DFM is a ‘significant event’ for Dubai,” said Malek Al Malek, Chairman of Tecom Group.

“As a publicly listed company, Tecom Group will offer investors the opportunity to benefit from a central player in Dubai’s business center proposition and a company well positioned to take advantage of Dubai’s market opportunities and of its attractive underlying macroeconomics,” he said. said.

The UAE Strategic Investment Fund and Shamal Holding are the lead investors in the IPO, with a total commitment of 283.75 million dirhams.

Last year, Dubai announced plans to list 10 state-owned companies as part of its strategy to double the size of its capital market to 3 trillion dirhams and attract foreign investment.

The emirate also unveiled plans to set up a 2 billion dirham market maker fund to encourage the listing of more private companies in sectors such as energy, logistics and retail. .

The Dubai Electricity and Water Authority was the first government entity to register on the DFM in April. The utility, which has listed shares in the largest public float in the Middle East and Europe since Saudi Aramco’s IPO in 2019, raised 22.41 billion dirhams from its IPO.

The move indicates “the market participants‘ deep confidence in DFM, which is clearly evident in the increase in activity and improvement in many performance indicators recently,” he said.

Tecom has a land bank of 375.3 hectares (40.4 million square feet) and access to additional land through an exclusive right of first offer with Dubai Holding Asset Management, which serves as the basis for the future growth.

The group’s 10 business districts are home to more than 7,800 companies. Nine of the districts are located in free zones which allow 100% foreign ownership, with tenants including Meta, Google, Visa, BBC, CNN, Unilever and Dior.

The districts allow full repatriation of profits and employ over 100,000 people in fields related to non-oil sectors that include technology, media, science, education, design and manufacturing.

Tecom announced its intention to pay dividends semi-annually – in October and April each year, subject to the approval of its board of directors and general meeting.

The company expects to pay a dividend of 800 million dirhams per year over the next three years until October 2025, implying a yield of up to 6.5%.

Tecom recorded a turnover of Dh485 million for the first quarter of this year and earnings before interest, taxes, depreciation and amortization (Ebitda) of Dh349 million, with an Ebitda margin of 72%.

“The listing of Tecom Group, which has an outstanding track record in developing and managing specialized business areas, reinforces DFM’s strategy of diversifying investment opportunities for the benefit of its broad base of local and international investors as well only to enhance market depth, liquidity and trading activities,” said Hamed Ali, Managing Director of DFM and Nasdaq Dubai.

“It also reinforces our efforts to streamline companies’ access to DFM’s services that enable business owners to sell stock and provide an effective fundraising platform, noting that our issuers successfully raised 127 billion dirhams in the market to implement their growth strategies.”

Popular Commodities to Trade in the Financial Market — Harrogate Informer